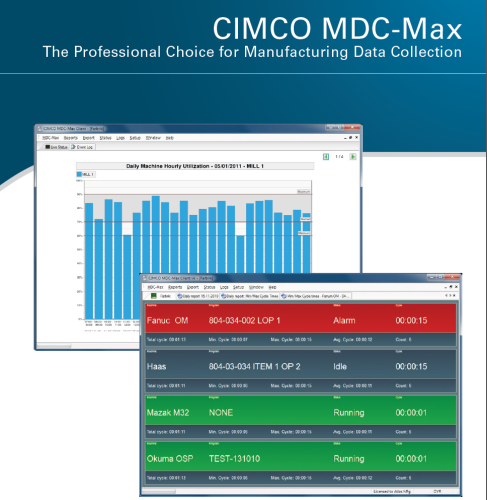 There is a myth that a Machine Data Collection (MDC) solution only benefits management. The truth is that it helps everyone, not just those in the back office crunching the numbers. You might be thinking:

“I would like to install MDC-Max but I know there will be resistance from the shop floor.”

Many shop floor staff are suspicious of monitoring systems as they see it as “big brother” watching them trying to get them to work harder. However, the staff can actually benefit from MDC-Max, since it can highlight problems that have been apparent to them for some time, but of which they have been unable to convince the management.

We installed MDC-Max at a company that was not hitting production targets, and where the production manager was being pushed to increase production. He had already reported problems with several of the machines that made it impossible to hit the targets, but nothing had been done. Two weeks after installation the production manager sat down with the MD, and the MDC-Max figures showed conclusively that 2 machines were indeed causing the backlog in production.

The machines in question were bar fed machines, and the company had switched to a cheaper material supplier, but the bars were constantly sticking and jamming the machines causing lost production. MDC-Max highlighted this problem and the company changed back to their original supplier and are now hitting their production targets.

A CIMCO Machine Data Collection (MDC) system was recently installed at a customer site that had tooling cost issues. The Production director had only recently taken over the management of the shop floor and felt that the tooling costs were too high. CIMCO MDC-Max was installed and completed before the night shift arrived. The next morning the production director checked the monitoring data collected from the machines and immediately had his answer. The night shift cycle times for 4 machines were 30% less than during the day and the same machines were stopped for over an hour at the end of the shift. The operators had turned up the feed rates so they could take a break at the end of their shift. But the increased feed rates resulted in poor tool tip life and increased tooling costs. The customer now has reduced tooling costs while still achieving the same production schedules and says that the system will pay for itself in a matter of months.

At a large Aerospace contractor they were concerned that their production was not keeping up with demand and had made the decision to buy several additional machines. They were suggested to check the runtime clocks on the machines for a week to see how much production time was being achieved. They were astonished to find that their machine utilization was below 50% but could not get an accurate picture of why this was happening. CIMCO MDC-Max was installed to monitor the machines along with bar code readers for the operators to swipe downtime codes. MDC highlighted several problems in production, two of which were poor maintenance response and failure to replace tooling quickly enough to get the machine back in production. Following the MDC-Max installation the customer implemented several measures including a priority system for maintenance and availability of new pre-set tools. They now achieve overall machine utilization of over 68% and meet their production targets which has increased profitability so they can now invest in a new plant.

A North West company approached the Advanced Machining Centre in Nelson to find them a solution to their lights-out machining problems. They had 4 automatic bar fed lathes that ran through the night, but occasionally one would stop and no one was there to fix the problem and restart production. It was decided to install CIMCO MDC-Max which monitored in-cycle from the machines and – if the machines stopped – it would send an email and a text message to a stand-by operator at home. The company has increased production and machine utilization without having to pay increased wage costs.

These are real examples from CIMCO A/S, download the full brochure for MDC-Max. CIMCO MDC-Max Brochure (English) you might also want to check out the MDC-Max Product page for more information.

What problems are you looking to solve?

Do you have problems you think Machine Data Collection could solve? Let’s talk about it.