The latest major version of the CIMCO Software suite has been officially released. The biggest improvements are in the MDC Max data collection, CIMCO Editor and the license management. The entire suite did receive significant improvements particularly with a still industry leading modern interface design as well as faster performance. CIMCO customers with active maintenance are eligible to upgrade for no additional charge but will require a new license file to run the software. 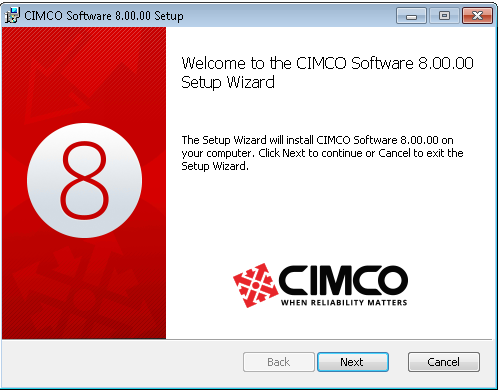 CIMCO Edit 8 comes with a redesigned user-interface that enables advanced workflow optimization by allowing users to fully customize the ribbon.

A new FTP client has been developed and integrated with the Editor transmission utility enabling easy FTP transfers to and from an FTP server.

A new advanced Open File dialog has been developed that makes it much easier to locate files by specifying search criteria on file name, file content, and created/modified dates.

Document editing features and backplotting have been improved and more converters have been added.

Constant Cut Inside Out

Constant Cut Inside In

This operation is used to mill the part from the outside in. That means that it can mill an open pocket or the top of a part where some islands protrude. The operation is generated using the very effective Constant Cut Strategy. All Constant Cut Milling strategies can be generated as Climb, Conventional, or both way milling.

This new operation uses the Constant Cut Strategy to generate a very efficient roughing operation. This operation can be generated as a one way or both ways operation to improve the performance.

Further, an improved help system with illustrations has been added.

In CIMCO Software 8 both DNC-Max Server and DNC-Max Client have received a completely new user-interface that follows the new design language of CIMCO Edit 8. The update of the DNC-Max Client not only concerns the stand-alone application, but also when running as a plugin in CIMCO Edit 8.

Further, Brother MDC signal transmission via HTTP is now supported. The Brother control C00 natively supports Ethernet and HTTP interface. This can be used to get signals such as CYCLE START/STOP, running program number, alarms, and part count.

CIMCO NC-Base 8 now uses Marie DB as primary database. The new database is faster and supports all the features of MySQL V5 including encryption.

CIMCO MDC-Max 8 has been rewritten with a new multi-threaded engine which greatly improves performance. During Rebuild operations users can now see the current status of the machines on both the live screen and on the operator screen.

CIMCO MDC-Max 8 also features a new archiving system, where processed cache data is stored in the database for quick access by clients.

CIMCO Software Manager is a new product which will centralize control, log viewing and configuration of the various service programs found in the CIMCO Software package.  Currently, it controls the License Server, but in the future, it will include DNC-Max Server Enterprise, NC-Base Server and NFS Server.

CIMCO License Server and the license system in general have been completely rewritten for improved security, flexibility and ease of use. The improvements most prominently reflect in:

The license keys use a new encryption method and format, and therefore have to be acquired again from CIMCO. This can be done directly from the Version 8 software, provided that the license is capable of running Version 8.

– Rewritten from the ground.
– Clients can now get an overview of who is using which licenses from the License Server in real-time
– Licenses can be reserved on the License Server so they can only be used by specific computers, based on IP Addresses, MAC Addresses, and/or Fully Qualified Domain Names (FQDN)
– License Servers using different license keys can now run on the same network
– License Servers will be able to run in a two-server system which will allow a setup to have a redundant backup server running live (still in development).

Version 8 features more than 200 bug fixes across all CIMCO products.