The winner(s) of our poll today won’t win accolades or prizes, but with this whole selection process heating up for Tesla, one really has to wonder where it will end up. Tesla bringing large scale battery manufacturing to one lucky south/west US state has big implications. The states said to be in the running are Nevada, Arizona, New Mexico and Texas. If you follow the news around this, you know that the states being considered are scrambling to make their laws fit Tesla’s direct approach to distribution. It makes one wonder if the laws will remain in place if Tesla snubs them. Since it’s Monday and everyone is probably anxious to get to work, we’re keeping it light today. So we welcome you to our completely unscientific opinion poll on which state will earn the estimated 6,500 jobs and untold other benefits. You can vote in one of three ways (or all three if you’re inclined!), just respond in the comments or if you’re on Facebook take the poll at our page. Polling will be tallied and the results will be announced in two weeks. If you prefer to Tweet your vote use these links below:

Thanks for participating and here is what the (battery pack resides in the floor of the vehicle) semi-finished product looks like (via Martin Gillet/Creative Commons on Flickr): 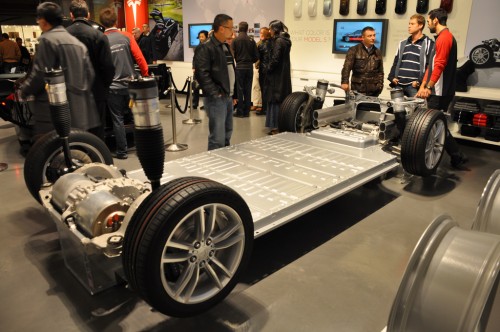 The results of this Tesla Battery Factory poll were posted on 4/28/2014.

I think Austin, TX would be an excellent location for the new Tesla facility.

Thanks for posting your vote!