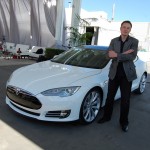 You might recall earlier this month when we asked you where you thought that Tesla would build their 5 billion dollar battery giga-factory. At the time only Arizona, Nevada, New Mexico and Texas appeared to be in the running and you voted fairly overwhelmingly in favor of Arizona. On April 26th New Mexico Watchdog reported that there may be a chance that the factory will be in … END_OF_DOCUMENT_TOKEN_TO_BE_REPLACED